Home Archeologia misteriosa The “Christ in the labyrinth” of Alatri has a twin in London.

The “Christ in the labyrinth” of Alatri has a twin in London.

London – The fresco with The “Christ in the labyrinth” of Alatri has got a twin in the Capital of the United Kingdom and Northern Ireland. In fact, at Easter 2012 a picture was painted showing the “Christ in the labyrinth”. Christine Stevens, made the painting which was displayed in the parish church of St. Giles in Barbican, in the heart of the City. Ms Stevens is the trustee of the labyrinth project at St. Giles in Barbican which is managed by the Bishop of London Rev Richard Chartres. 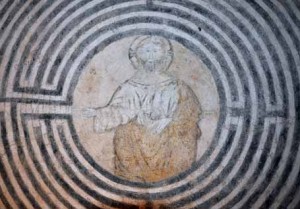 Every year, just before the Holy Week, the coordinators of the project realize a labyrinth and organize a meeting about it.
This year, as Ms Stevens thanked enthusiastically an article in the English magazine “Caerdroia” and several other web sites giving information about the Alatri’s fresco, they have decided to choose the object as the theme of the meeting.

“We were very excited on getting the news about the existence of this frescoed labyrinth, which is unique in the world, with Christ in its centre. On the internet we watched the videos and read and translated the articles dealing with this fresco.” The painter added “that we decided that the Alatri labyrinth should be the main element of our meeting for Easter 2012.”

At these premises they show the level of European interest for the Alatri’s fresco, the painting orn by Stevens.
The picture, of course, is not an exact copy of the one in the cloister of St. Francis’s and it couldn’t be because it has been inspired by the pictures taken before the restoration of the painting. For example there is a hand which appeared to be getting out of labyrinth but after the restoration, it appeared that there wasn’t. Or the colour in the background of the Christ. In the picture in London it is light blue, representing the sky where Christ Pantocrator is. But in the real fresco it is light, almost white. Ms Stevens confirms it is due to her “interpretation and not a copy. But I had fun painting it and it was used for our Easter meeting in London where it received much interest”.

The copy shouldn’t be considered as a lack of respect of Alatri’s artefact, but actually the contrary. The British public are passionate people and researchers know exactly that the Alatri fresco is unique to the landscape of universal art.
That’s why they would like it be seen by as many people as possible, in particular other through artistic interpretations. Otherwise there will soon be more admirers the original. And it’s well known that when a work of art is replicated, it means that it has reached a relevant place in the cultural and collective artistic imaginary. Just think about how often a universal work of art like “La Gioconda” or “The Cenacolo” by Leonardo da Vinci have been copied, replicated, re-proposed and interpreted becoming true icons to society. Should the same destiny happen to the artefact in the cloister of St. Francis in Alatri?